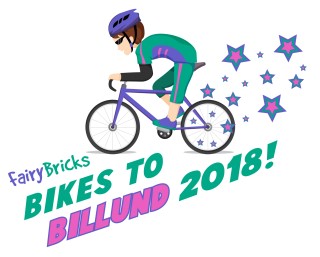 We are a six strong cycling team, made up of four riders and two helpful (more likely hindering!) support staff. Peddling hard for Fairy Bricks will be Huw Millington, Ed Diment, James Pegrum and Ralph Doering. They will be ably assisted from the support van by Kev Gascoigne and Fly Tipping.

All six of the team hold Fairy Bricks very closely to their hearts. Huw allowed the first fundraising effort on his website Brickset back in 2013 when the name Fairy Bricks didn’t even exist. Ed joined the Fairy Bricks Trustee Board in 2014 and has given a huge amount of time personally since and made the resources of his company, Bright Bricks available whenever possible. James and his LEGO Building friends Brick To The Past have constantly supported the charity by building incredible models to assist at Fairy Bricks events. Ralph continues to build inspirational LEGO mosaics, often building them live at Fairy Bricks events. Kev, aka the Hairy Fairy founded the charity in late 2013. Lastly, Fly has devoted countless hours in making LEGO donations directly to the hospitals Fairy Bricks visits.

The brave cycle team will be departing the LEGO Store in Leicester Square London at 08:30, Thursday September 20th. After eight gruelling days of riding they should arrive at The LEGO House in Billund, Denmark at 11:00 Thursday September 27th. The planned route is as follows

A total of 975 km in eight days! While supporting the incredible foursome along the route, Kev and Fly will also be sneaking away to make LEGO deliveries to hospitals on the route.

We would love to have people join us on the route so if you want to have a day with us, then please get in touch for our exact starting destinations.

We hope our effort and your sponsorship will enable Fairy Bricks to support more children, in more hospitals than ever before – if you wish to donate please click HERE