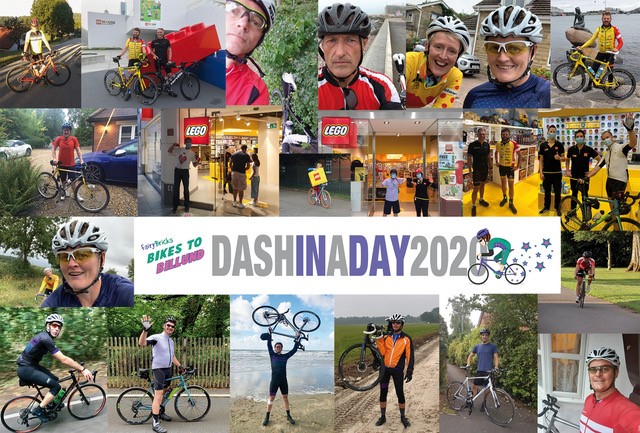 As you will be very aware, this year has been somewhat of a strange one! Due to the pandemic we have all found ourselves living and working differently. The loss of all our events meant that our fundraising also ground to a halt – So we had to come up with new ways to work – hence the ‘Sponsored Whateva’

One of the first to answer the call was the Fairy Brick Riders to Billund – Ralph, Ed, James and Hugh; who this time were joined by Jesper, Caspar, Joe, Gary, Jonathon, Elspeth and Martin. The team decided to do the distance from London to Billund in one day in a rather unique way: The night before: 10pm: the way from bed to bike is prepared. The ’clothing streets’ for my little niece inspired me to do the same thing. This way I will not forget anything: Saturday 7:30h: We have been chatting in preparation for this day using a WhatsApp group. Today we’re using it to track each other’s progress. This is a short version of what happened in our group.

Martin Clarke from France is the first to start. Martin has contacted me via the gofundme.com webpage and asked if he can join the team. Of course he was welcome and we’re looking forward to some awesome pictures from France. He starts with perfect weather conditions: 7:54h: Although weather forecasts had been horrific with thunderstorms and heavy rain, I have a dry start. My way will take me from our place in Greiz to the LEGO store in Leipzig.

Meanwhile according to James Pegrum it is raining cats and dogs in Devon! 8:02h: in Billund, Denmark Jesper Vilstrup the Director of the LEGO HOUSE and Caspar Bennedsen, the Danish LEGO Certified Professional will each cycle a 100km together. 8:05h (7:05h UK time): Gary Davis, the builder of the pink LEGO Bike is in a good mood. Please note that Gary is using an older Mountain Bike rather than a Road Bike for this race. Kudos! 9:09h (8:09h UK time): Huw Millington, the fourth team mate of the Bikes to Billund Team and owner of the website brickset.com starts his tour. 10:16h: Martin climbed another hill in France and gets rewarded with a beautiful view. It is great fun and motivation to see the photos and reports from my fellow riders. Weather is excellent but hot in Denmark and France, hot and cloudy in Germany and a nightmare in the UK. 10:22h (9:22h UK time): Gary has reached the LEGO Store in Watford. His back tyre has a slow puncture. The streets are flooded and there is an awful drizzle. Otherwise all is good :o) His picture is my favourite: 12:06h (11:06h UK time): Jonathon Goldsworthy reports from the south coast. The first 15km have been ok but the next 70km have been rainy. Little did I know that this was not even half of his route! No wonder his mood is not too happy: 12:36h: Completely different in Denmark: Jesper und Caspar are happy to be back in the LEGO House Store. Caspar will be cycling for another charity this afternoon! 13:33h (12:33h UK time): Joe Perez made his way from Bristol to Bath. I am very jealous as I just love this place on earth. I actually lived in the house in the background of his photo in 2012! What a happy accident! Despite the bad weather Joe has done 102km! 13:37h: The store team in Leipzig was awesome and good fun! Many thanks to you guys! 13:48h: Going to a LEGO store and not getting LEGO? No way? A small Pick A Brick cup is always welcome! And so this cup makes the soundtrack on my way back as it makes the typical LEGO noises with every pothole I encounter: 14:10h (13:10h UK time): Weather was worse than expected. Gary is back home. Despite being cold, having a slower bike and all the rain, he has travelled a new personal best: 66,2km! Kudos my friend! 15:09h (14:09h UK time): It is starting time for Elspeth De Montes and her friend. Both are on their single speed bikes! What an unbelievable effort! Still we get many smiling and laughing selfies of them on our WhatsApp group. I am very impressed! 21:18h After 210,96km I have reached home. Elspeth has joined our Strava recordings on challengehound.com. Jonathon thinks about going out for some extra kilometers ;o) However doing 200km in the rain, he is the winner of the day: Almost all of us have broken their personal best for their furthest bike ride! There have been tons of medals on Strava for each rider. It was such a great feeling to know that we were all doing this together although on very different and distant locations. And all this for the great work of Fairy Bricks! We have collected £3569 on gofundme, an additional £170 via PayPal, plus £50 in cash and Martin just announced that his RLUG will donate another €1000!

A great THANK YOU to all my team mates as well as to everyone at Fairy Bricks for doing such a wonderful job!